For nearly a decade since 9/11, America’s national security establishment’s understanding of the threat of Islamic terrorism and its approach to contending with that danger flow directly from a conviction that they have nothing to do with Islam, except to the extent al Qaeda “perverts” or “hijacks” that religion.

But what if this characterization of the problem we continue to face nine years after 9/11 is simply and utterly wrong?  What if there actually is a direct tie between what recognized, mainstream authorities of Islam call “shariah” and the jihad (or holy war) it demands of adherents, some of which is manifested as terrifying violence?

What if, in addition, jihadists engage in non-violent – and, in some ways, far more insidious – efforts to accomplish the same goal: the supremacy of shariah worldwide under a caliph? 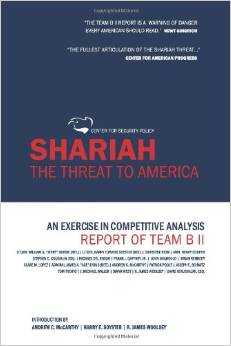 Together, this group has formed a “Team B,” modeled after a similar initiative that supplied at a critical moment during the Cold War a second opinion on Soviet intentions and capabilities, a study that helped shape and underpin Ronald Reagan’s efforts to challenge the form of appeasement of our totalitarian ideological foes known at the time as “détente.”  Ultimately, that Team B report helped underpin his strategy as President to take down the USSR.

Like its predecessor, today’s Team B II has provided a dramatically divergent “second opinion” from the official U.S. government (“Team A”) party line on the most important challenge of our time.  Shariah: The Threat to America, counters the notion that the present totalitarian ideology bent on our destruction can be safely ignored, misconstrued or appeased in the name of the contemporary counterpart to détente: “engagement.”

Shariah: The Threat to America demonstrates a troubling reality:  The Obama administration and its immediate predecessors under both political parties – along with many state and local governments – have been blind, in some cases willfully so and in every case perilously so, to fundamental facts: the true nature of the enemy we confront; what actually animates him; the progress he is making towards achieving our destruction; and what we need to do to prevent his success.

This situation is dangerous in the extreme to our Constitution, freedoms, form of government and security.  It must not be allowed to persist.

As a critical step toward the needed corrective, Team B II is proud to present its contribution to a long-overdue and urgently needed national debate about the true wellspring of jihadism: shariah.  The findings of this study are as compelling as they are authoritative.