SEE NO SHARIA: HOW OUR FIRST LINES OF DEFENSE HAVE BEEN DISARMED

For much of the past fifteen years, the United States government has failed to understand, let alone decisively defeat, the enemy that, under the banner of its al Qaeda franchise, murderously attacked our country on September 11, 2001. The reason why that has been so – notwithstanding the bravery and skill of our men and women in uniform and the expenditure of hundreds of billions of dollars – has been unclear to most Americans, including some in government. Until now.

With the publication by the Center for Security Policy of a new book by two of its leaders, President Frank J. Gaffney, Jr. and Vice President Clare Lopez, See No Sharia: “Countering Violent Extremism” and the Disarming of America’s First Lines of Defense, the case has been forcefully made that this sorry state of affairs is a product of a sustained and highly successful influence operation by Islamic supremacists. Under both Republican and Democratic administrations, Islamists in general and the Muslim Brotherhood in particular have gained access to and considerable sway over policymakers in the White House, the FBI and the Departments of State, Justice, Defense and Homeland Security.

See No Sharia describes the trajectory that has flowed from such penetration and subversion. It traces how fact-based counterterrorism and law enforcement have inexorably been supplanted by an approach defined by accommodations demanded by Islamists – purged lexicons and training programs, limitations on surveillance, case-making and rules of engagement and above all, eschewing anything that gives “offense” to Muslims. 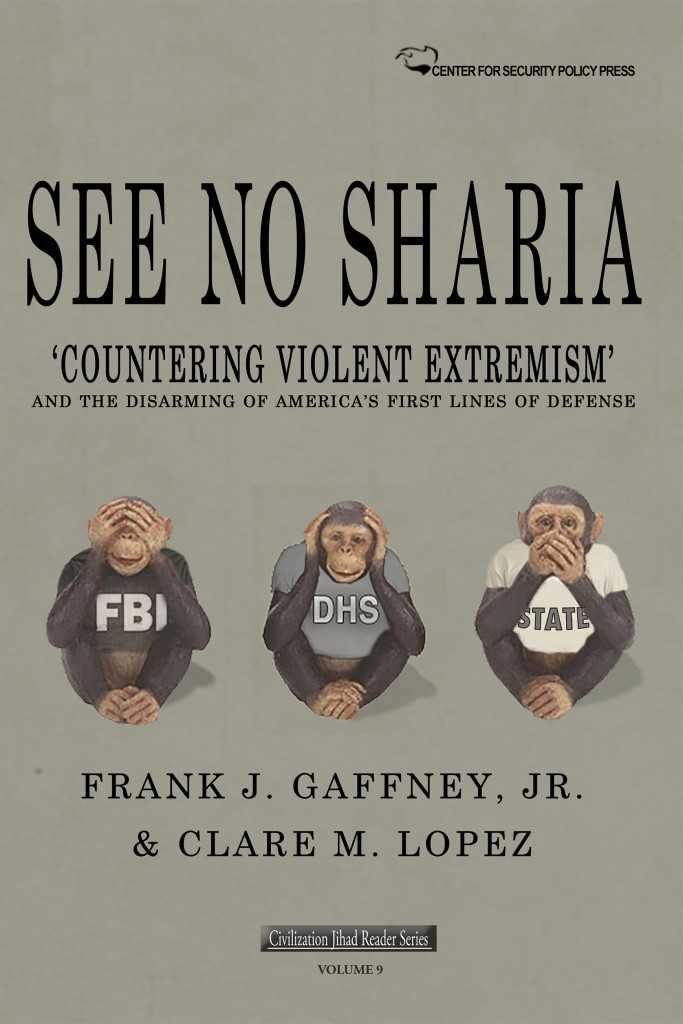 In addition to showing the perils associated with such policies and practices as America faces the growing threat of global jihad and its animating doctrine of sharia, this book provides specific recommendations as to how to restore our first lines of defense – the FBI and other law enforcement, the Department of Homeland Security, the military and the intelligence community – whose effective service is needed today more than ever.

“Americans expect government officials to fulfill their oaths of office by protecting the Constitution, the Republic it established and its people from all enemies, foreign and domestic. The vast majority of our public servants yearn to do their duty. Yet, as See No Sharia makes plain, for at least a decade and a half, they have been obliged to conform to policies that greatly diminish their chances for success. We simply cannot afford to disarm those in our first lines of defense against Islamic supremacism and its jihad – both the violent kind and the stealthy sort the Muslim Brotherhood calls ‘civilization jihad.’”

“As a career intelligence professional, the extent to which our policymaking apparatus has been penetrated and subverted by Muslim Brotherhood and other Islamist operatives is deeply problematic. This book is meant to expose their handiwork – and to impel the urgently needed and long-overdue policy course-correction.”

The Center for Security Policy is proud to present this monograph as the latest in its Civilization Jihad Reader Series. See No Sharia: “Countering Violent Extremism” and the Disarming of America’s First Lines of Defense is available for purchase in Kindle and paperback format at Amazon.com. As with all of the other volumes in this Readers Series, this one can also be downloaded for free at www.SecureFreedom.org.

For further information on the threats shariah poses to our foundational liberal democratic values, see more titles from the Center for Security Policy’s Civilization Jihad Reader Series at http://c4secpol.wpengine.com/civilization-jihad-reader-series/