Northeast Syria, controlled by the Syrian Democratic Forces (SDF), holds the largest number of prisoners and displaced people, including relatives of ISIS fighters. An estimated at the al-Hawl camp for civilians lived under ISIS rule. A staggering 70,000 people in the al-Hawl Camp greatly outnumber the U.S. backed SDF. Currently, the camp is guarded by about 400 SDF troops.

Recently, there have been signs of growing radicalization and extremist behaviors in the camp, led by women. There have been reports of women stabbing multiple numbers of SDF guards, and other occupants of the camp have been murdered. 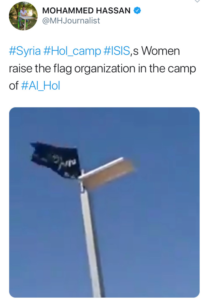 Many women and children who lived under ISIS occupation have shown unwavering support for the terror group.

In response to al-Baghdadi, ISIS women in the camps use the social media platform, Telegram, to raise money and spread propaganda.  One of the most notable accounts ‘Justice for Sisters,’  is available in Arabic, German, and English. The account was used to disseminate ISIS propaganda relating to the al-Hawl camp and raise money via PayPal. Organizers instructed supporters on how to avoid suspicion in order to prevent their accounts from being deleted by merchant companies.

“Please don’t use Islamic terms in the donation, there’s a danger in the account being closed by PayPal,” read a message posted on one of the PayPal links. Some of the accounts had non-descript titles such as “Honeymoon in Vienna”.

It appears that the Justice for Sisters account was run by individuals located in Germany. The group, headlined by European women pictured in niqabs, sought to target its campaign toward supporters based in Europe. Various PayPal accounts linked to the efforts from al-Hawl were able to raise about €3000 altogether.

Overcrowding in the prisons where male ISIS prisoners are being held has raised concern. It is estimated that there are about 10,000 ISIS fighters, including foreigners, being held in these prisons. Since they outnumber the U.S. backed Kurdish forces guarding the prisons, this could allow for a devastating prison break. ISIS is also looking to recruit from the Arab Sunni population in Northeast Syria who resent the Kurds.

“ISIS exploited multiple prison breaks in Iraq to fuel its rise to power in 2012 and 2013 and is likely contemplating a similar strategy in Syria,” according to a report from the bi-partisan Syria Study group.

An ISIS prison break will be detrimental to U.S. national security. The U.S. military has been working on destroying every discoverable source of income to ISIS such as its oil fields and caliphate. A prison breakout means more personnel for the terrorist organization to be able to launch more attacks in the Middle East. The organization forms cells in the Middle East responsible for planning attacks targeted at Western countries. This is a significant reason why the U.S. takes the fight to the ‘center of operations’.

Over 1,300 displaced Syrian women and Children have returned to their homes in Syria. It is understood that majority of these families are relatives of ISIS fighters. There is no doubt that some of these people could potentially be tools for the terror organization.

ISIS is actively looking to expand its reach and establish caliphates in other regions of the world, particularly Afghanistan, Nigeria, and Turkey. In Nigeria, ISIS recognized and supported group ‘Islamic State West Africa Province (ISWAP)’, which currently controls a large territory in Northeast Nigeria and continues to focus much of its attacks on Nigerian government and military structures and personnel.

At a Senate hearing last Thursday, a panel from the Syrian Study group explained that ISIS is thriving financially because it is not dependent on foreign funds. This is due to the control of territory as well as other criminal activity that it engages in such as bank robberies and kidnappings.

There are several ways in which this resurgence can be successfully challenged: