It is human nature that we feel anxiety before any challenging event. When challenged, we naturally want to succeed, to persevere, to come away from that challenge in a better position. To do this we understand that we must prepare and train ourselves beforehand.  These natural human inclinations surrounding pre-event anxiety are now rising to a level of national consciousness surrounding the significant challenge that is but weeks away – election day.  If you are feeling this anxiety, that’s a GOOD thing – it means you’re not indifferent to our future and that you recognize the immense blessing we have as Americans to elect our leaders.

Surely, part of America’s anxiety surrounding this election is fueled by the tumultuous events which have transpired over the last year, ranging from a pandemic unleashed upon the world by Communist China to thousands of protests and hundreds of violent riots “spontaneously” flashing off in cities across the country. Political and media personalities and national governments shovel blame on each other, vying for the ear of American citizens to influence their vote (and in some cases, non-citizens who have been fraudulently registered to cast a vote in this national election.) In the midst of this media and social media-enhanced narrative slugfest, Americans have no doubt been both inspired and disappointed at times with the behaviors and language used by the candidates running for office at all levels of government.

Importantly, though, voters should take into consideration more than just the political mudslinging. They should pay careful attention to the policy positions of these candidates, their decision-making on topics of moral importance, and their leadership (or lack thereof) in crisis situations – and most importantly – the party platforms they represent.  Why are these particular factors so much more important than the eloquence of speech or daily outward demeanor of a particular candidate?   Because, in many cases both at the state and federal level, the candidates – and more importantly – the party platforms are of such stark contrast that the nation’s future will be fundamentally changed by the politician and party who wins.

With so much at stake, some Americans’ anxiety seems to reach the level of panic. This is not surprising given the panic which ensued in the early days of the pandemic where we witnessed emptied grocery stores and people fighting over basic necessities, or the unrest and violence which has plagued our cities.  Americans should be concerned about the prospect of unrest and the possibility of scarcity and chaos surrounding the election and the period between it and the inauguration.  The very same foreign adversaries who seek to influence our elections are also capable of also taking down our most critical of infrastructures, such as our electric grid.

So, should Americans panic?

There are many resources which Americans can turn to in order to prepare themselves for the coming challenges associated with our national elections, but four of the most informative are listed here.

The first two of these resources help citizens understand the contrast between the current candidates and their party platforms:

#1 – How should I vote?  Using our God given right to vote to love one another, By Kevin Briggs 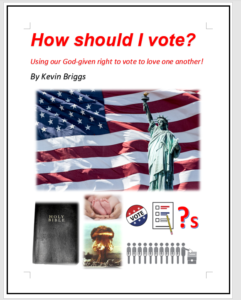 voting is a way for us to love one another and to protect the innocent and oppressed.  One of the most helpful aspects of Briggs’ research is in the area of party platforms.  The Republican and Democratic party platforms are hundreds of pages long, so Briggs conducted the research on these documents to pull out the language pertinent to some of the most important topics related to morals and our nation’s security.  This is a MUST READ, even for citizens who believe they’ve already made up their mind for which way they intend to vote.  A free downloadable copy of the monograph can be found at: www.howshouldivote.us

Throughout 2019 The Center for Security Policy has conducted a series of webinars covering very important national security topics ranging from biodefense to the threats from Communist China to the vulnerabilities associated with our election systems.  This month features a series of webinars specifically designed to educate voters on important national security topics.  To compliment these webinars, the Center’s Dr. J. Michael Waller created a simple voter guide to “understand, at a glance, ten main national security issues that show stark differences between President Donald Trump and former vice president Joe Biden and how they would defend American interests at home and abroad.” The guide is a simple and fast read and dives into many more specifics surrounding the policies and beliefs of the candidates themselves.

The second two resources will help Americans prepare for the enduring challenges which will remain in wake of the election and which will grow in the face of inaction.  These are the challenges associated with America’s enemies, both foreign and domestic, threatening our republic.  These resources come in the form of a handbook and website and a new online TV show:

Securing America brings Gaffney’s unconstrained analysis of threats to our Republic together with some of the nation’s foremost national security experts to discuss pressing and current national security topics which are often ignored or purposely overlooked by today’s mainstream media.

Securing America covers topics ranging from the consistent and overwhelming threat of Communist China to America’s “Enemies Within” and features guests who have personally experienced persecution by Communists, Marxists, Islamists, and other enemies of freedom as well as those whose lives have been dedicated to researching, understanding, and countering these threats.

The show airs every weekday at 5pm ET at https://americasvoice.news/ and previous segments can be viewed and shared 24/7 online from the Securing America webpage: https://www.securingamerica.tv/

Reading and reviewing the resources provided above will take time, probably at least a few hours. With so much at stake for the future our nation, and all the oppressed who eagerly hope for the freedoms we enjoy.