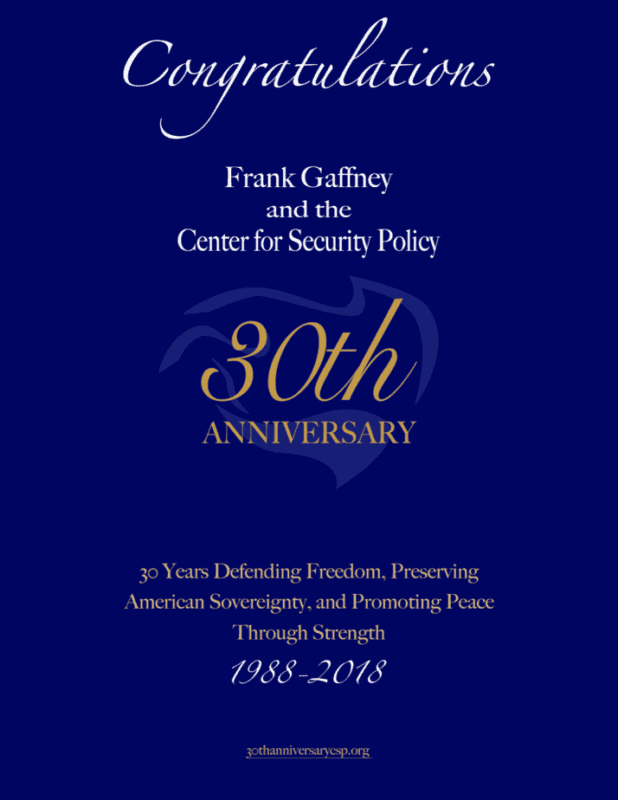 Over the years, CSP has been honored to receive commendations from many distinguished Americans and we will be sharing their remarks with you as a part of our anniversary campaign. President Ronald Reagan received our Keeper of the Flame Award in 1995 and we are delighted to share his letter commemorating that evening.

The Center for Security Policy’s closest and most active supporters make up the National Board of Regents.

As a supporter of the Center, you join with us in honoring those who protect America. Each year, we honor individuals at annual galas with a Freedom Flame Award, Mightier Pen Award, or Keeper of the Flame Award.

Keeper of the Flame Award

The Keeper of the Flame Award was inaugurated in 1990 by the Center for Security Policy to bestow recognition on those individuals who devote their public careers to the propagation of democracy and the respect for individual rights throughout the world. The Award both acknowledges the past contributions of its recipients and reminds others who share their commitment to freedom of the work yet to be done.

1996: The Honorable Newt Gingrich – Speaker of the U.S. House of Representatives

Since 1992, the Center for Security Policy has recognized with its Freedom Flame Award individuals who have strived with great effect to promote liberty and safeguard those who cherish it via the practice of peace through strength.

1997: The Honorable Edwin Meese III – Former Counselor to the President and Attorney General of the U.S.

2006: The Honorable John Bolton – U.S. Representative to the United Nations

2011: The Honorable John Lehman – Former Secretary of the Navy

2013: The Honorable Allen West – Former Member of the U.S. House of Representatives

2016: The Honorable Ron Dermer – Israeli Ambassador to the United States

The Mightier Pen Award was launched in 2001 in recognition of individuals who have, through their published writings, contributed to the public’s appreciation of the need for robust U.S. national security policies and military strength as an indispensable ingredient in promoting international peace.

2001: Mark Helprin – Author, Commentator, Senior Fellow of the Claremont Institute for the Study of Statesmanship and Political Philosophy, Fellow of the American Academy in Rome, Member of the Council on Foreign Relations

2013: Diana West – Nationally Syndicated Columnist and Author of: The Death of the Grown-up: How America’s Arrested Development is Bringing Down Western Civilization

Launched in 2005 and named after Terry Elkes, a founding member of the Center’s Board of Regents, the Terry Elkes Sacred Honor Award is a tribute to those who, directly and though their generous support of the Center, make possible the defense and advance of freedom.

2012: The Lynde and Harry Bradley Foundation